First Time Being Host for Traveler

First Time Being Host for Traveler

bule, couch surfing, hoka hoka bento, host traveler, polandia, ramadhan jazz festival, sabang, tourism, travelling, tulus
0
It started from my office mate (ika) who texted me that she has invitation as host one of traveler from CouchSurfing. If you don’t know what couchsurfing is about, just search it on google. At that day, there was traveler from Polandia who want to come to Kota Tua. Ika asked me to accompany her while Ika still in Cikarang. Since, i still in Bogor when Ika texted me. So, ika just give me traveler’s number. Anyway name of the traveler is Monica.
When I already in home, monica called me. And we made appointment to meet up. Since she phoned me about 5 pm and i have to break fasting and teraweh pray. So, i decided to meet up about 8 p.m. Monica asked me “Do you know any shopping mall near here?”. I just know nothing. So i ended the phone, asked my family and texted Monica to go to Gajah Mada Plaza. I don’t know where is it anyway. 5 minutes later I remember that Grand Indonesia also near from Kota Tua. So, i recommended her to go to Grand indonesia.
After teraweh pray, i went to Grand Indonesia. I asked security “Pak, J.Co dimana ya pak?”. He answered that there is no J.Co at Grand Indonesia. I confused and called Monica to ask about this one. I asked her “Where is actual location of J.Co? Do you know what is the store in front of that? so I can easily to find out”. Suddenly, indonesian talked me via Monica’s phone “mas, ini temennya daritadi disini” | “Emang J.Co nya dimana sih mas?” | “Lantai dasar. Deket pintu masuk” | “Hah? Bentar bentar mas. Ini di mall apa ya?” | “Gajah mada plaza”. Okay. I and monica had missunderstanding. Then, i just asked her to wait there. I continued to Gajah Mada Plaza. 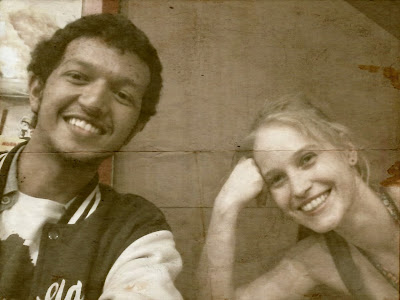 In Gajah Mada Plaza, i was directly to J.Co. And finally met with Monica. She is just the one whose blonde there. So, I introduced myself. So did she. Then we have a chit-chat maybe 15 until 30 minutes. After that, we continued our trip to Sabang.
Monica asked me to have kinda light dinner. I ate at my house. But, she want to eat something light without rice, etc. I just brought her to Sabang to choose one of food there. She chose Hoka-Hoka Bento. Then she ate, i drank while continued our conversation. Many things that we discuss. Culture, pop, punk, hipster, music, energy, religion, family, culture, etc. After finished, we went to Cut Meutia, menteng to attend Ramadhan Jazz Festival. 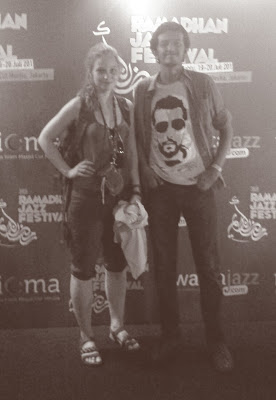 That was my main purpose to go that night. I want to see Tulus performance. But, unfortunatelly when i was there, Tulus already finished. So, i just take a picture, have a chit-chat with my mates then go back to Ika’s kost to bring Monica. Since Monica would stay in Ika’s kost. Then i back to my house.
Yeah, that was my first time as host traveler from Couch Surfing. That was very interesting that we can share our insight, our culture with peope from outside our country. Fortunatelly the traveler was Monica that I can easily connect to have conversation with her. She is smart, fun and beautiful polish. I hope next trip as a host would be more interesting.
NIZARLAND
“Where The Land Inspires The World”