candi arjuna, dieng, jalan-jalan, kawah sikidang, mie ongklok, open trip, purwokerto, sikunir, travelling, wonosobo
0
The desire to go to Dieng has been existing in my mind since a year ago. Eventually about two weeks ago, I could make it.  I registered open trip by My Permata Wisata. The travel fee is IDR 385.000 all-in, from Jakarta Kota train station to Dieng and revert to Jakarta Kota. Initially, Sandy, my YOT mate, asked me to join this trip together with several YOT mates. I confirmed to join this trip while asking to other circles to join this trip. I asked my office mates and last phuket trip members. In the end, I had this trip together with three circles, YOT mates, Office Mates and my “Arab Gang”. In fact, two of my “Arab Gang” were substituted by Ina and Anton, the paralayang pilots. We’ve just met there and effortlessly can share many interesting stories and new languages.
Before going to Jakarta Kota train station, I have problem in my office which made my boss mad at me. I almost was threatened failing join this trip. Fortunately, I still can go out from office though a bit late. We were rushing to Cawang train station by Taxi, then continued to Jakarta Kota by train there. Jakarta Kota is our meeting point, so I met all of my mates there.
The train which used for our trip started to go around 9 pm. Honestly, the train is over my expectation. Although some of my mates complained or grumbled about the train, I didn’t do it. I enjoyed the train. Because the first and the only one of my experience going to central Java by train is in 2009 when I went to Jogja using business class train. However the current economy class is better than former business class. As I remember, when in 2009 business class is still not using AC and peddlers can enter the train. Otherwise, current economy class has AC and there is no paddler at all. And the AC quite cool even very cool in our back way.
From Jakarta Kota to Purwokerto train station takes about 10 hours. It’s quite long. Nevertheless, my friend said it can be just for 6 hours if I go using north track. We were going through south track, headed to Bandung first then continued to Purwokerto. We arrived at homestay around 1 pm as I remember. After having lunch, we went to Dieng Plateu Theater. Firstly, I was very excited wondering how the dieng theater is. When we were there, as always we took many pictures of us then watching movie about Dieng. Sorry to say, but the movie quality so bad. However the quality of Dieng Theater is still okay, I mean, comparing as theater in out-of-town.
Afterward we continued to Telaga Warna. Having name as colourful, but the fact is not. Telaga warna as not colourful as its name. We captured some pictures there and continued to Kawah Sikidang. Rain was starting there and I got beautiful picture according to me. Back to home stay, had dinner, and getting know to new friends.
The new day was started by hiking to Sikunir. It is the most famous spot in Dieng as I know. Some of my mates post beautiful sunrise photograph there. Even though I didn’t get the sunrise, again and again I still enjoyed how we reach the top together with my travel mates. Personally, I think the track as not as steep as big mountain, but it’s quite challenging. After taking selfie, we went down and sit in the bus.
The last vacation spot where we visited was Candi Arjuna. You can’t compare it with Candi Borobudur or other prominent candi. Nonetheless it can be nice place to walk with your mates while chatting about our interest. We returned to homestay, had a lunch and continued to Purwokerto train station. We stopped to eat mie ongklok before heading to the station. And in back way, I got new experience by trying Ina’s nest. It called hammock actually. Although Ina and Anton were reprimanded by security, I had tried this swing before 🙂
The last one 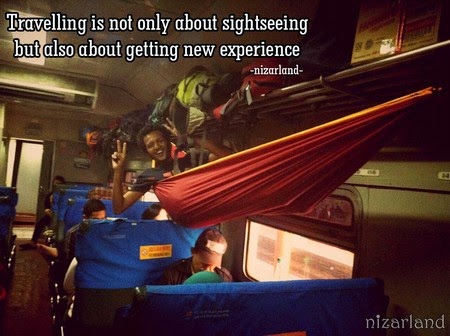