#CeritaNebeng, bangka, jakarta, kemang, motor, nebeng, nebengers
0
Currently I’m running Festival Museum Nasional whose operational office in Bangka, Kemang. Yesterday, I didn’t use my motorbike since I went around the schools for roadshow using my friend’s motorbike. He suggested me back to home after we had finished roadshow. However, I thought I can ask Muthia or Sesha to join one of their cars. They live in Tebet, neaby my house.
Unfortunatelly, both of those women didn’t back to office. They directly backed to home after having done for roadshow. That was my first time actually backed from Kemang without private transportation. I have several common options. First one, busway/angkot. Second one, ojek. Third one, taxi.
I am the one who always use public transportation when I don’t use my motorbike. I mean, I rarely use ojek or taxi. I can’t imagine using taxi because I thought It can be more than IDR 50.000. Maybe 80.000 or 100.000 because the traffic was bad. I tried to see GOJEK price for my route and it shows IDR 41.000. If I want to use public transportation such as busway or angkot, I need to use Ojek first to Tendean or Mampang. However I imagined that busway will be loaded by tons of people at that peak hour. At a glance, I remember Nebengers because one of my friend (Yudha) is president of district Tangsel for Nebengers (Lurah Nebengers Tangsel).
I tweeted and mentioned @nebengers, but it explained me the rules. 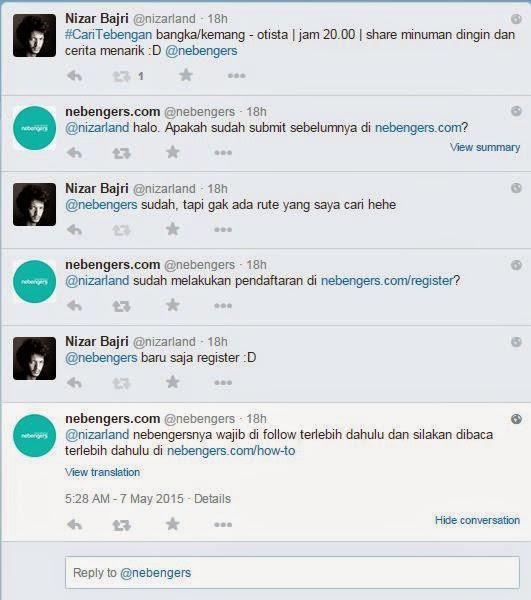 After doing all prerequisites, my tweet has been retweeted by @nebengers, but there was no mention at all for me. I tried to search #BeriTebengan and I found one nearest route for me, that was tweet from @amatjanury. Immediately, I mentioned him and finally we had a deal to meet in Rolling Stone Cafe, Ampera. 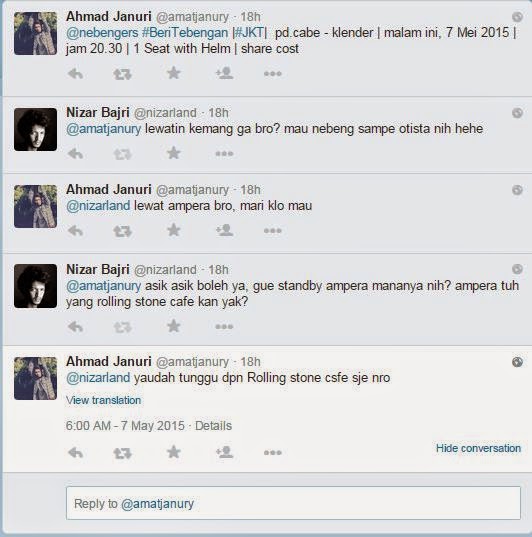 I went to Indomaret to buy fresh drink for him as thanksgiving. Anyway I’m forget that actually he tweeted “share cost” as requisite but I just gave him fresh drink, I just realized when I arrived at home. Back to the story, I need to go to Rolling Stone as meeting point, I ask my officemate, she said there is Kopaja to go there, but it’s quite rare. I asked ojek near Indomaret, he said “IDR 30.000” from bangka X (200 meters from McD Kemang) to Rolling Stone. I guessed it was quite expensive eventhough I didn’t really sure about the ojek price. I walked a bit until McD kemang wishing there would be Kopaja. Nevertheless, there was Ojek who approached me. He offered himself, first he said IDR 20.000 then I bargained to IDR 10.000. Finally we dealt IDR 10.000. That ojek is very nice to me.
After waiting about 10-15 minutes in the cafe. My phone was vibrated regarding incoming text and there was stopped motorbike nearby me. I guess he was Amat and yes my guess was right. I shoke his hand and gave the fresh drink. Then I sat on the back seat and share some stories with him. 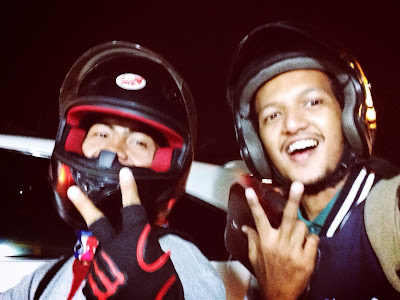 Basically, I love making new friends and @nebengers is one of interesting way to expand our network. I think, I will bring my extra helmet regularly then post to twitter #BeriTebengan. Despite many people need our tebengan and we can get new friends. I hope there will be more interesting nebeng stories 🙂
NIZARLAND
“Where The Land Inspires The World”